She is My Hero

So the school year has begun and so has the Homework!!! As I'm reviewing my Daughter Devynn's homework I was a taken aback.  The teachers assigned a little questionnaire to learn more about their students.

My Devynn struggled and disliked school for a longtime before we had her assessed and learned that she had Dyslexia.  She is an amazing girl, and I am proud of her! She is my eldest child and ever since her little brother Donovan was born she has been very nurturing and protective of him.  Even before he was diagnosed with Autism.

When he was diagnosed, nothing changed.  In fact she became a little more protective.  They're only 1 year and 3 days apart in age.  But the way she cares for him, you would think they were decades apart. She was a huge part of his early intervention.  One of his therapist so to speak. He mimicked her a lot.

As they got older, she continued to care for him in her way.  I remember going to the park and some kids wanted to play tag. They invited them both to play, and she grabbed Donovan and off they went.  I suddenly hear her telling the group of kids.  My brother is playing.  He doesn't really talk, and he may grab your ears.  He has Autism.  My heart melted.  She couldn't fully grasp the concept of Autism, but there she was educating.  She was Advocating for brother.

So coming back to her homework assignment.  The questionnaire had a section where you had to name someone who she looked up to or considered a hero. 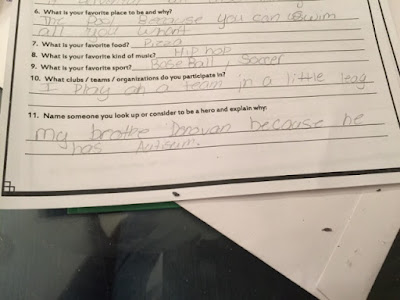 It took me a minute for it to sink in.  My heart melted AGAIN!  She doesn't like to write and she has a hard time getting into detail when writing.  So I asked her to explain.  She said "because it's harder for Donovan to do regular things sometimes"

I ADORE all three of my children!  They are my motivation for striving to make a better place for their futures.  But at that very moment, as I read that answer,  SHE became my Hero!
Posted by aboogiedownchicksworld at 9:35 AM