Why should we only give for Christmas? With the season of giving coming to an end and the New Year is quickly approaching, I am proud to say that I have Joined the Deed a Day organization in setting a resolution to do a good deed a day! The 100 Good Deeds bracelet is not only a cause to encourage everyone to do a good deed, but it also a fashion statement.  In a world full of chaos and a bit of crazy, I think that the Deed a Day movement is an amazing thing.  There is nothing more rewarding than seeing someone smile because of something you were able to help them with, all while looking good doing it.  Whether it's picking up someone's keys after they have fallen, or helping an overwhelmed parent in a supermarket.  Paying it forward is something that more people should do.  The rewards is the greatest feeling, and the bracelet is motivation and reminder of the good you have done and will continue to do. The 100 Good Deeds project is made possible by the Abataka Foundation, Inc., a 501(c)(3) non-profit organization. As a mother of a 10 year old daughter, I stand behind and appreciate what they are about. Their mission is to transform communities by empowering vulnerable women and spread kindness.  The Abataka Foundation provides economic and educational opportunities to women and girls across Africa and elsewhere. Proceeds from the sale of 1GD bracelets are reinvested in the program, supporting more women and girls with more training in even more countries.
These beautiful bracelets are made by vulnerable women who have been trained for this work in Uganda, India, Indonesia, Zambia, South Africa, Rwanda, and Inilnand Haiti. This project gives these women a way to support their families through earnings, while empowering them to also contribute to good deeds around the world.  Curious about these women? If you would like to Join the movement or know someone who would, and you'd like to gift them with one these amazing bracelets Check out their website out for more information.
Help me make this a better world, a more giving world, a world we want to live in!!!! A world where our woman feel empowered and encouraged to do good and become great! Join the #DEEDaDay Movement share one of the following images on Facebook, Instagram, twitter or Pinterest using hashtag #DEEDADAY and/or #1GD. Be sure to tag the 100 Good Deeds Bracelet: 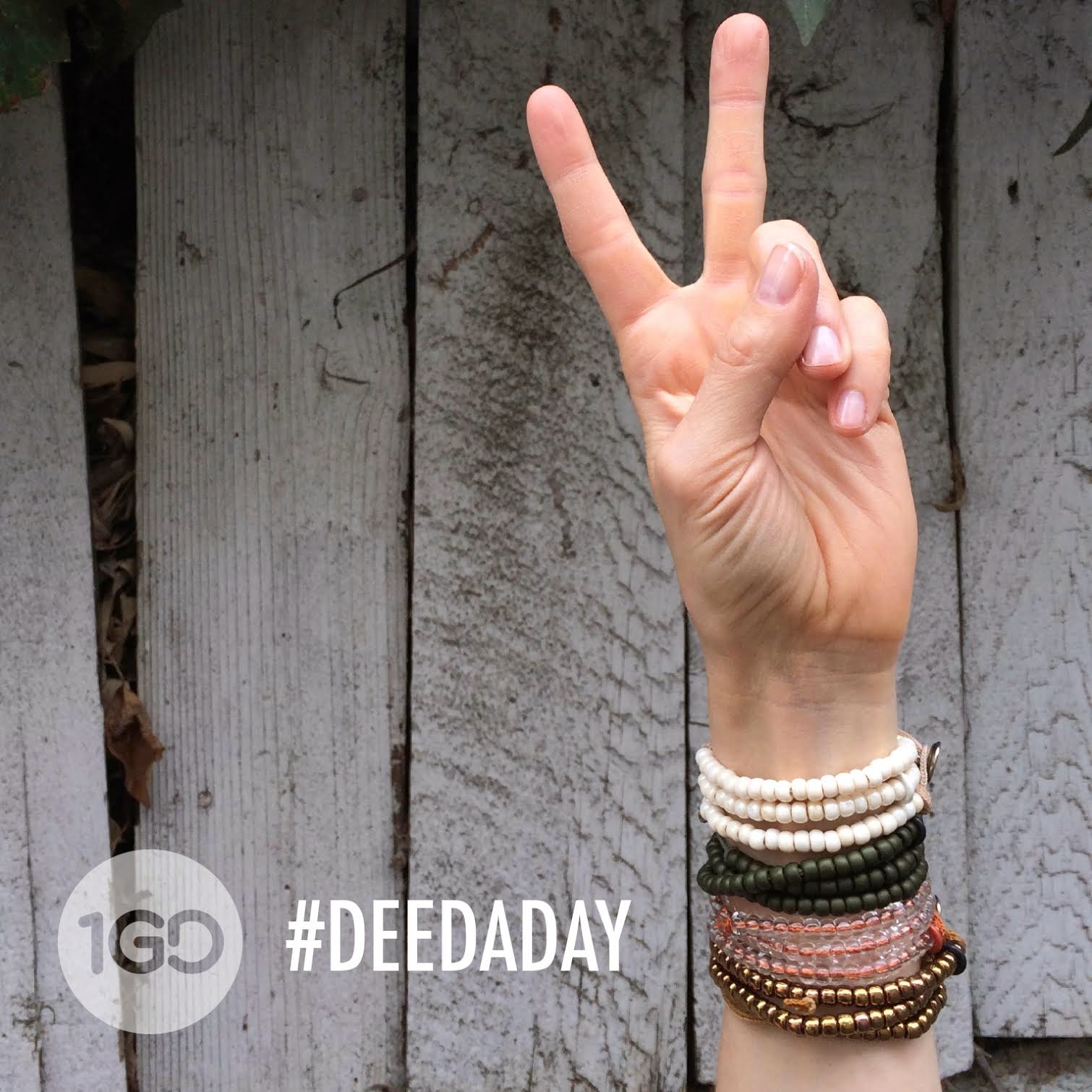 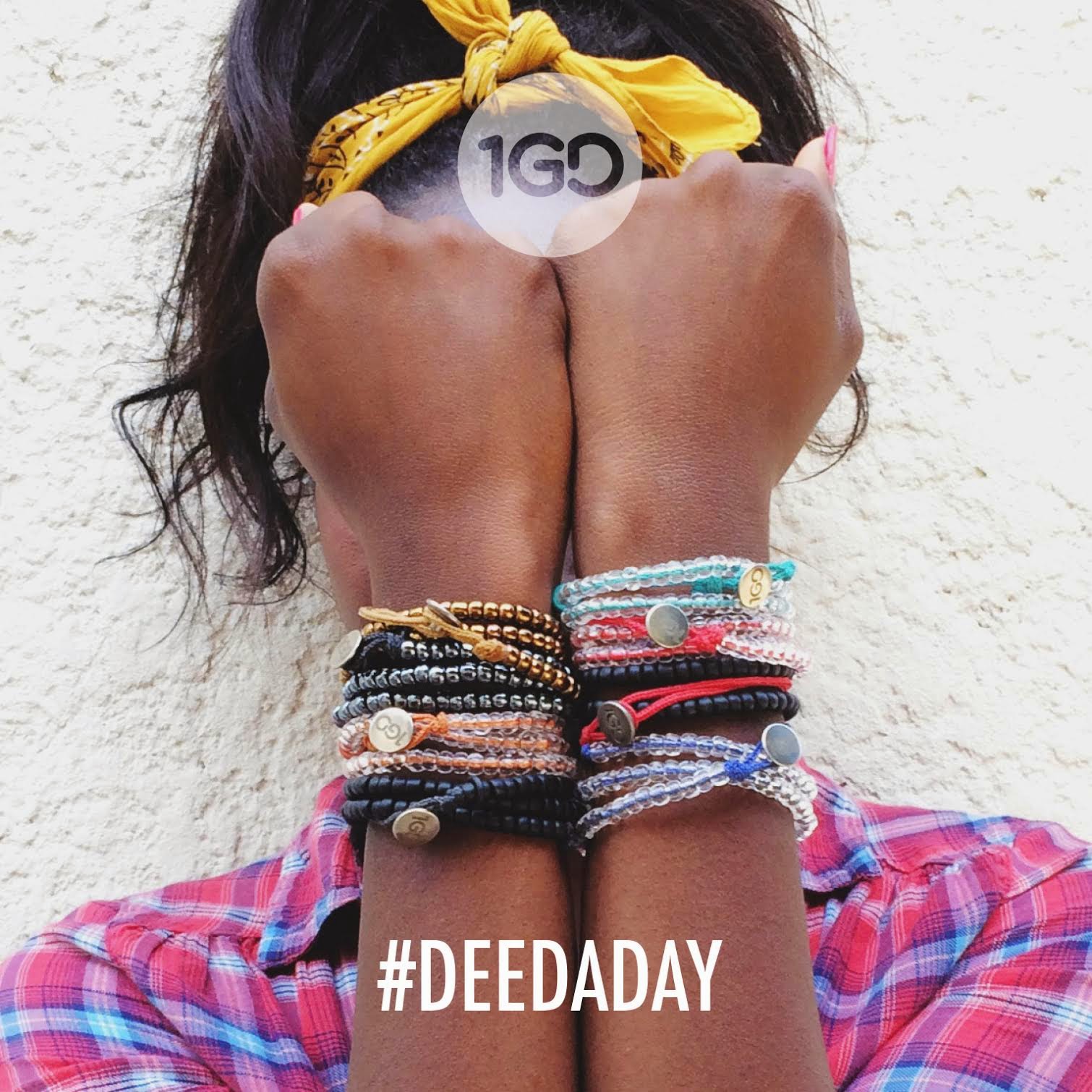 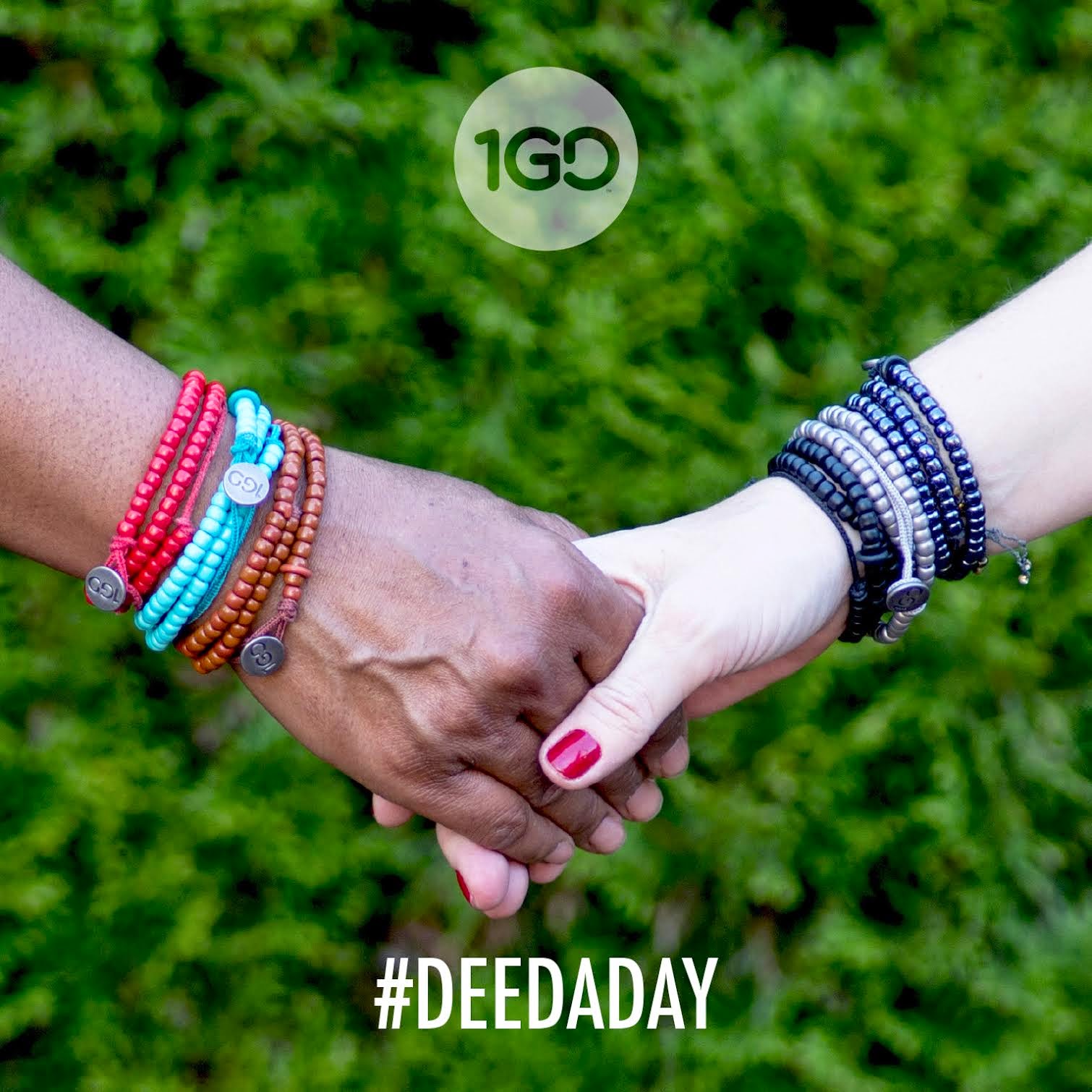 Together we can change the world, one deed, one bead, and one act of kindness at a time! The 1GD bracelet gives you 100 changes to be grateful.
If you would like a chance to win a bracelet and learn more about Mary Fisher and her amazing work, be sure to  mark your calendar to join us tomorrow from 9-10 pm ET for the #DeedADay #GNO hosted by the Mom it Forward team. 100 Good Deed Bracelet founder, Mary Fisher, will be joining us for what is sure to be an inspiring conversation! For more information or to RSVP, click here.


I was gifted this 100 Good Deeds bracelet to review and share with my readers. However, all thoughts and opinions expressed herein are my own.

Posted by aboogiedownchicksworld at 12:28 PM No comments:

I have very fond memories of the holiday season as a kid.  I always looked forward to the holidays, because it meant that the family would get together.  We would listen to great music and the house would be full of amazing aromas, from all the delicious dishes.
When I was pregnant I wondered how Christmas would be for my children.  I try to continue the same traditions that my mother practiced with me, with my kids.  We are sure to take the kids to see Santa.
Having a child with Autism, a simple trip to see Santa can be difficult.  We have been truly blessed with all of our experiences with Santa. 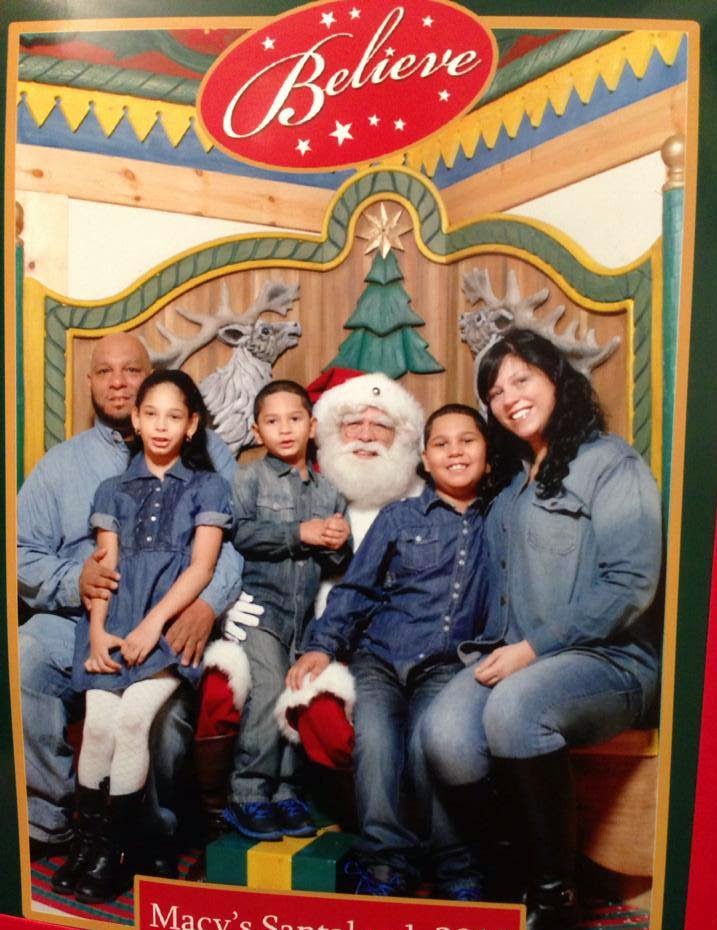 This year Donovan insisted that we see Santa!  I felt horrible, because we missed the Quiet Santa offered by Macy's and Autism Speaks.  But, we set out to find a way to meet Santa and Take our family picture! 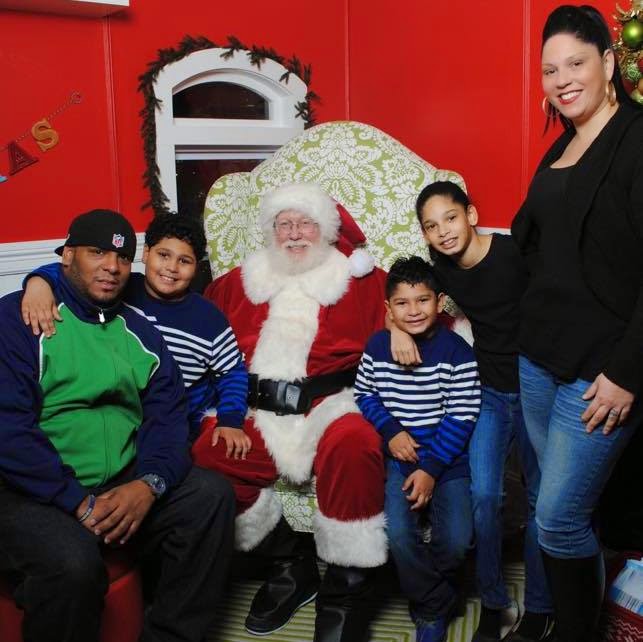 We gather together on Christmas eve, we have dinner as a family.  We eat and drink, and reminisce about Christmases past.  The kids get excited about Christmas day and prepare for Santa's delivery.  ﻿
﻿ 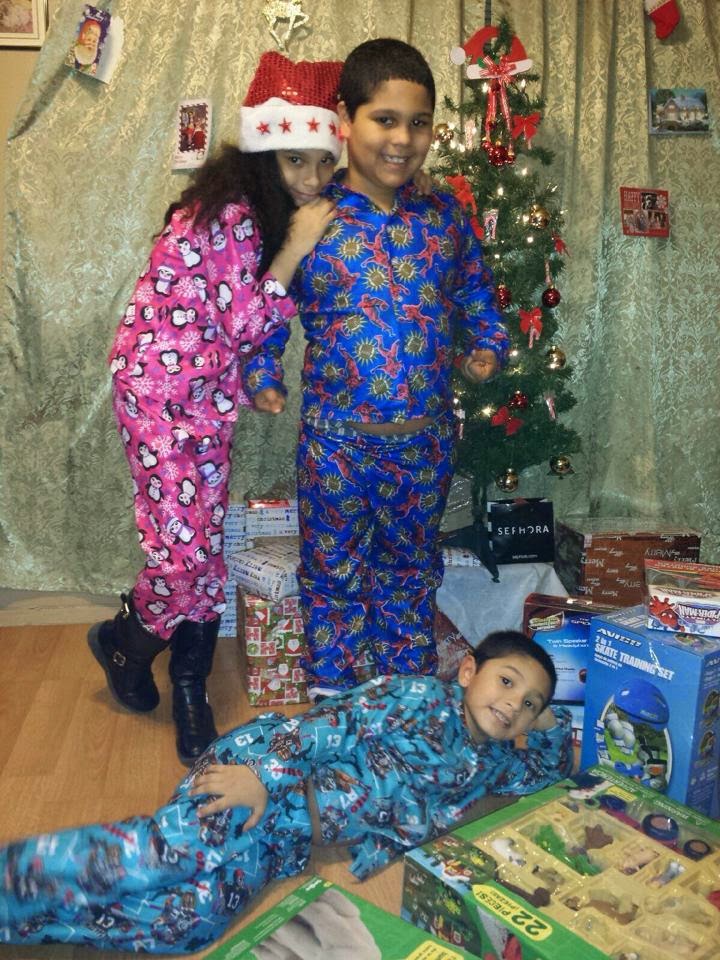 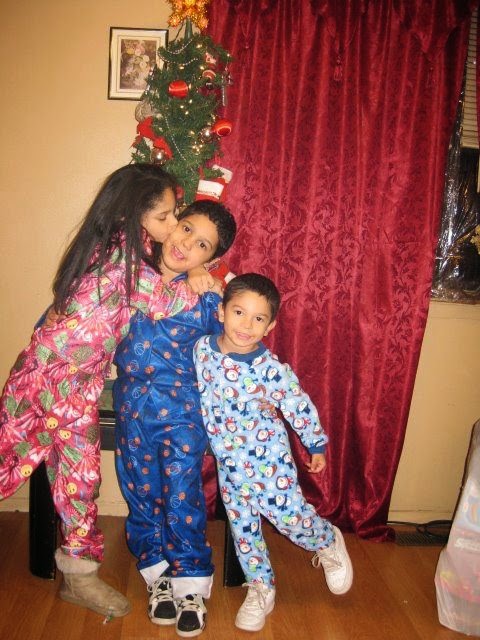 They leave out cookies and milk and fight to stay up and catch a glimpse of the Happy Fat Guy in Red.  Christmas morning, me and the hubby are usually exhausted from waiting for the kids to fall asleep to put out their presents. But the smile on their faces is so worth it!!!

Posted by aboogiedownchicksworld at 2:28 PM No comments:

I entered a coquito contest called the Coquito Masters on the suggestion of a friend. 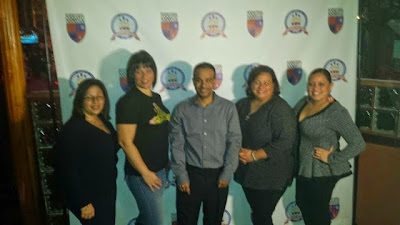 I had been making and selling coquito for Thanksgiving and Christmas season for my family for years.  I decided that I would start selling it to make some extra cash for Christmas presents. 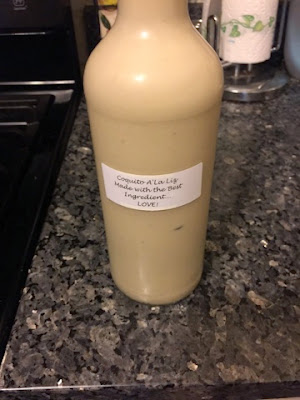 I was hesitant to enter, and I never expected to win.  It isn't that I don't believe in my product, but that I put so much pride and love into it, I was afraid to hear that it wasn't any good.  I entered anyway, with no expectations,  and I was one of two who won for my borough of the Bronx! 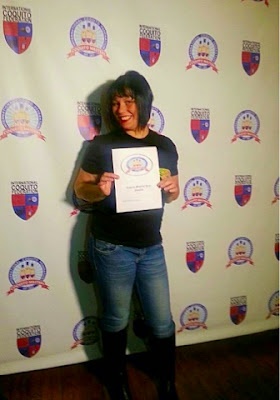 I was moving onto the Coquito Masters Finals!!!! Myself along with other winners from other boroughs came out and competed on Saturday December 13, 2014. 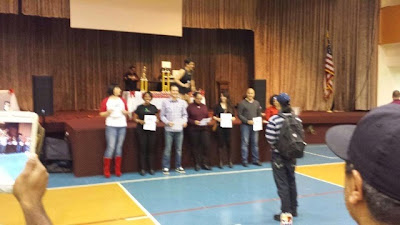 I was both excited and nervous.  The event was held in the Gym of the Taino Towers. 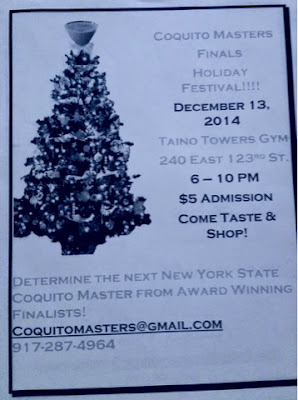 I got there early to turn in my bottle of coquito.  It is a blind test.  Your mixture is taken and given a letter.  It is brought out in a pitcher so no one knows which is which.  The gym was huge and there were vendors selling their products.  Most were products that were very rich in the Puerto Rican culture.  The music playing was Latin Christmas tunes.  The salsa rhythms made me want to jump up and dance bomba! So imagine my excitement when they had a troupe come out and perform! 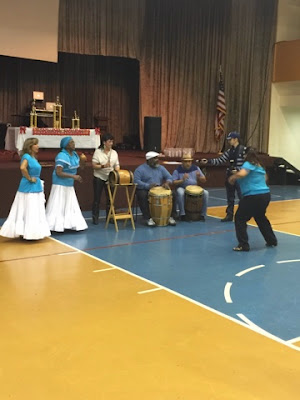 They were great! And it made reminisce back to Christmas as a little girl.  I remembered a night while I was settled for bed, and was awoken by loud music and singing.  It was a good ole fashion Paranda. My family and friends had come to our apartment and everyone squeezed into our tiny living room.  They played traditional songs, and my parents hurried to get them food and drinks.  It was customary to feed them and give drinks!  Since it was the holidays and Christmas was approaching Coquito was in order.

My dad loved cooking and he didn't know how to cook small portions.  Everything was done in excess.  So the bottles began to pour, and the night continued.  I loved hearing the music and watching how happy everyone was.  My nerves began to ease, at the memory.

During the event there were people interviewing the contestants.  They asked why I entered, what Coquito meant to me, and how did I feel being the youngest contestant?  I laughed and asked if I really was! 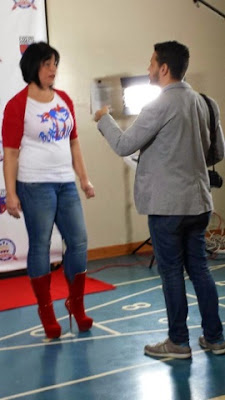 While being interviewed, it dawned on me, that our culture is slowly fading away. I realized that just by making Coquito, I was keeping up tradition and teaching my kids about their culture.  I want my children to embrace their culture and keep up traditions.

Back to the contest, tasting began and all the tasters went out with their pencils and voting sheets. 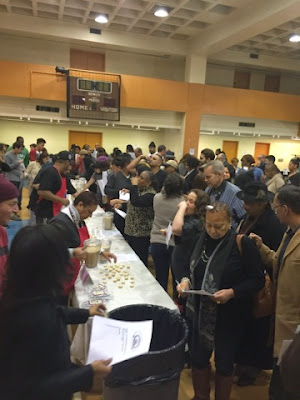 I waited nervously as everyone tasted and casted their votes. 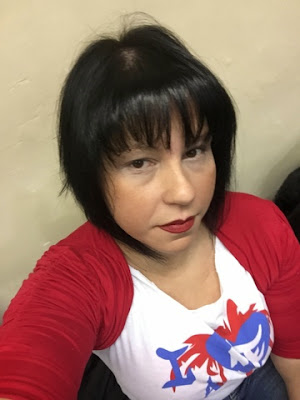 I didn't win the contest, but I am no loser!  I left there with an experience and memories that I will look back at and chuckle about.  I had an amazing bunch in my corner!!!! 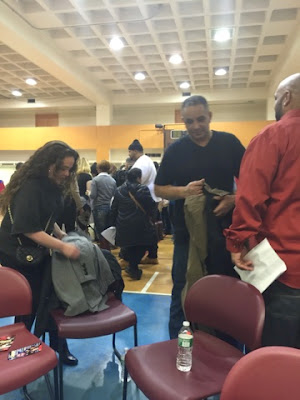 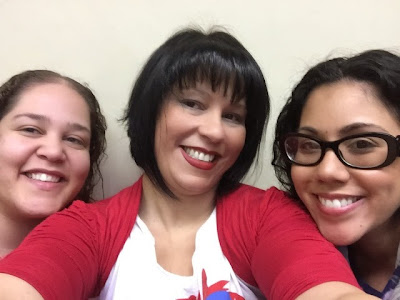 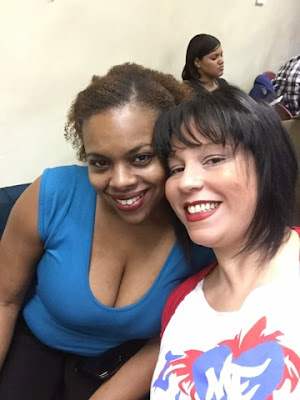 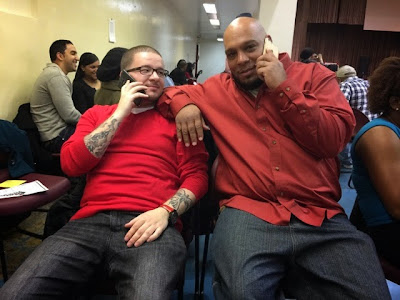 I was blessed to be honored by some amazing people in my corner!  Time is a very expensive gift, that I treasure more than anything!  Thank you!!!!

Posted by aboogiedownchicksworld at 1:23 PM No comments: