This is my DONOmite!!! He has Autism and he loves baseball!  Well he loves to bat up and run the bases, but don't we all!!!! I know I loved it!!! Being at bat, waiting for the pitch and preparing my body for the swing!  BING!!! The sound of the bat kissing the ball! Throwing that bat and running as fast as my legs could take me.  I wanted to make it all the way home!!!! I get it!!!!

Two summers ago, while watching my nephew play at little league, Dono showed interest in the sport.  I quickly began to find a place for him.  Finding one in the Bronx proved difficult.  I was told about a Miracle League up in Westchester.  I quickly signed him up!

Dono came alive, he wore a smile from ear to ear!!! He did really well with throwing the ball, catching was a little difficult for him, but he hung in there.  Batting up, most kids were using the Tee Ball Set, but Donovan wanted no part of it.  He wanted to bat up, and have the ball pitched to him.  He looked like a natural batting up.  He knew exactly how to hold the bat and wait for the ball!

He waited patiently for the pitch.  Patience is something Dono has very little of! LOL But he was a champ! There went the pitch, Swing and BING!!! He made contact with the ball! he threw the bat and went for it!!! I was in shock!!! Dono was running the bases like a champ!!!!


My Donomite was Running Home! and I was overjoyed.  Everyone cheered him on.  He made it and was welcomed with high fives and cheers!!!!

After the game, we asked Dono if he had fun.  He said in his Dono voice "YEP".  I asked do you want to come back? and he replied "Nope".  I was confused.  So I asked, why not.  He said "I want to play real baseball" There you have it!!!!

At that moment, I didn't understand what he meant, by real baseball.  But it suddenly hit me.  Dono wanted to play on a field with grass and dirt with other players.  My mind began to race and so I began my mission, to find a setting where my DONOmite could play "Real Baseball".

I started to think of ways to to make it happen.  Then a light bulb went off.  I reached out to the Bronxchester Little League, and they welcomed my idea of the Bronxchester Challenger Program with open arms!!!

Now here I am I have 60 kids in total registered and I am hosting my 4th Annual Autistic Kids Rock event and all funds raised will cover costs of Equipment, uniforms and fees!!!

I remember years before my Donomite's diagnos  of Autism, there was a story of a young boy who had missed out on therapy and an education.  He was Autistic.  He had limited verbal skills, and hadn't had a proper education.  Apparently he slipped through the cracks and then became a victim of red tape.  I'm not sure why, but this story had a major impact on me.  I felt a strong pull to it and wasn't sure why.  It stayed with me.
As my Donomite was developing and I began to suspect that something wasn't quite right, the story of this little boy always popped into my thoughts.  It was why I had asked that he be assessed for Autism.  I was told they don't usually diagnos children before 36 months, but as a parent I had a right to request it.  And so I did.
All through Early Intervention, and pre-school, as I went through therapist, and schools, the story would somehow pop into my thoughts.  I think it's why I paid such close attention to his therapists and his placements.
As I began the turning five process, I paid careful attention to each step. Attended whatever workshops and meetings that were offered.  I never wanted to miss anything or have my Dono get lost in red tape.  This was a stressful time in my life.  I didn't want to fail my child or myself.  It was a bumpy road, to say the least.
Kindergarten began, and I loved his teacher.  She kept constant communication with me and Dono seemed to be doing well.  But, every so often, I would wonder where was that little boy now.  Was he getting a proper education?
Dono's second year I began to notice a decrease in his progress and he was stimming a lot.  He was doing things he'd never done before. Such as hitting himself, screeching, and scripting more than usual.   His eye contact and he wasn't engaging as well as was before. This worried me.  So I brought it to his teachers attention.  I found out that he wasn't receiving OT.  This made me angry!  Why wasn't I told?  OT is a crucial  necessity in Dono's Progress.  He has major sensory issues, and needs to constantly have them addressed.  I thought of the little boy lost in the system red tape, and my heart hurt.  Then I began to wonder about all the other children that were lost and/or would eventually be lost. All the parents/guardians that didn't know they could fight back.  I intended to, I did and I  still am!
We are in Dono's 3rd year, and I still love his teacher, but the Dept of Education and the schools administration are horrible.  I won't stand for it, and I will not allow my son to be swallowed up in the red tape.  I have a plan, and just like a chess match I am the Queen and I will protect my King!
Posted by aboogiedownchicksworld at 1:03 PM No comments:

It is the thought that matters, so Thanks!

I didn't start blogging or sharing my journey on social media to become famous, or to be rewarded. I started sharing my experiences because of three reasons.  1. I was lost and unsure of myself. I didn't feel confident about the decisions I was making.  I thought if I shared what I was going through, that maybe someone could relate.  As I became more familiar, I thought someone could learn from my experiences and that would make things a little easier.  2. I needed a place to vent and express myself.  Writing seemed to help.  3. Most importantly I wanted to spread awareness of Autism and acceptance.
I never really thought that anyone would read what I was writing, or that I would even impact someone's life.  I recently received an email from a fellow warrior mom.  And I have to say that it has motivated me to continue to post and share. 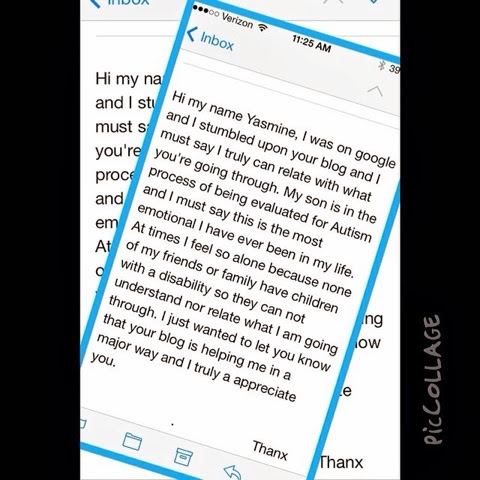 Through my journey I have met many amazing individuals, and they have touched my soul.  I am grateful for each, for they have all made me a better human being in some way.
These little things, help me to see that what I have set out to do, are indeed happening!  And that is all the reward I need!
Posted by aboogiedownchicksworld at 9:09 PM No comments:

Awareness and Acceptance in Puerto Rico!!

So I recently traveled to Puerto Rico to handle some family business with two of my brothers.  I planned my trip by purchasing my plane tickets and renting a car with Hertz.
At my arrival I was grateful to see my two big brothers waiting for me, especially when my flight came in at 4:44 am!  I checked in at the rental desk, and the person was not very friendly.  She was a bit rude, but I was focused on getting out of the airport!
I asked my brother to drive because I was exhausted.  On our ride to the house, my brother and I talked.  It was dark out and hard to see much.  As the sun rose, I began to look around.  When suddenly the registration sticker caught my eye! 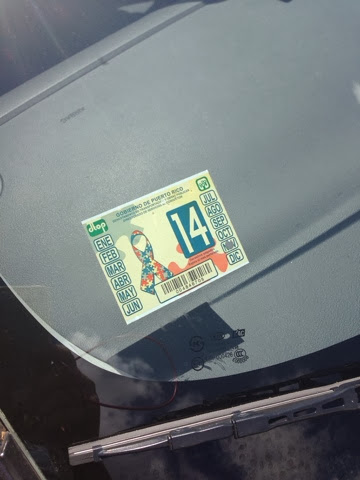 I thought it was amazing that the sticker had the Autism Awareness ribbon on it!  This made me happy!!!! More Awareness and hope for acceptance!
Posted by aboogiedownchicksworld at 8:51 AM No comments: