My Cup Runneth Over

A few months ago in April, a fellow warrior mom asked if I would be interested in swimming lessons for My Donomite.  I immediately said yes! Dono loves water and I had been trying for a long time to find a place that was suitable for him.  But most places that served children with special needs or on the spectrum were either very expensive or had a waiting list of like five years long.  (Exaggeration) So you can just imagine the joy that overcame me when she told me that Roberto Clemente State Pool was looking to offer swimming lessons.

The time came and she tagged me in a flyer announcing the upcoming program.  It wasn't for just children with special needs but instead it was inclusive.  At first I was a bit disappointed.  I had tried to put my Donomite in a soccer program once before and was turned off and very disappointed by the way the coach engaged with him.  Needless to say he only participated in one session.  So I was bit nervous to hear that the swimming class would have "typical" children.  I thought about just enrolling my daughter Dev, but thought why not.  Dev is a great big sister and is naturally protective of him, since they were both infants.  (They are literally one year and two days apart in age).  You needed to be between the ages of 6-11 and my Dusty is only 4 years old.

Getting to the park to enroll them was proving to be difficult, but my good friend Dalilah offered to sign them up for me.  I am truly grateful to her.  You had three sessions to choose from, and two time frames.  I chose the second session from 6:15 pm -7:15 pm.  I knew I was pushing it being that I get off of work at 5 pm, but I knew that this was a great opportunity for them both.

The first day of the classes ended up being a cloudy day and it drizzled on and off.  (Check out http://diaryofalovingmom.blogspot.com/2013/07/im-smiling-mommy.html) on day two the weather was amazing and I was super excited for them to get started.  But there was a little drama caused because I took my Donomite through the ladies locker room.  I had to keep repeating myself to all the staff that he was autistic and that I couldn't let him go through the men's locker room alone.  But, we made it through and they loved every minute of it.  I was afraid of how my Dono would engage.  Once the class began I was in complete awe. He sat along the poolside with all the other children and he followed all the commands. 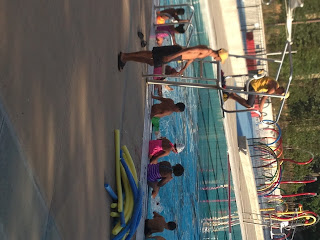 Parents weren't allowed poolside I was forced to watch from above and not hover or constantly speak for him.  I did notice that Dev was very attentive and I can tell when she was speaking for him, but that wasn't very often, because my Donomite kept up with the others most of the lesson.  The next ten days were just as equally uplifting.  The weather and his health kept him from a couple of lessons, and we almost missed the last day.  He had been sick and the following day it rained and the class was cancelled.  That Friday his school called and said he was throwing up, but my mom called in the middle of the day and said that he seemed better and wanted to go to the pool.  So I decided we would. And I am so thankful that we did.  What I experienced that evening was amazing!  I was so proud of my two.

For the last day they were taken to the diving pool, which is 11 feet deep and initially they jumped in with noodles to keep them afloat.  But the final part they were to jump in alone.  There was a lifeguard in the water waiting and one by the diving board.  I was full of so many emotions.  A little scared, but for some reason I just knew that they would do well.  Dono went up first and I admit that I held my breath, but when I saw his little head come up out of the water, and that huge smile on his face I exhaled and began to cheer him on.  He stuck his little hand out of the water and waved.  his eyes focused on my with the camera (my little ham).  He swam all the way to the edge all alone, with no help from anyone!  I was so happy, I cried!  Tears of joy ran down my face and I ran to him and hugged him.  Showered him with kisses and cheers for a great job.  There were lots of high Fives!!!! 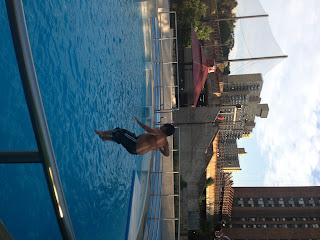 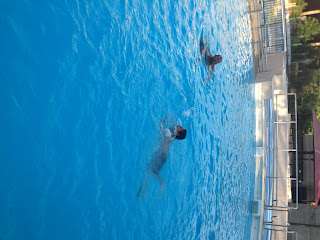 Then my Diva Dev was up and what I say from her was Olympic swimming potential.  She had great form and was fast a lighting!  She was just as amazing as her brother.  I am so thankful that I went against my decision not to go.  I am always my children's biggest cheerleader, but on that Friday evening I was so full of joy at their accomplishments. 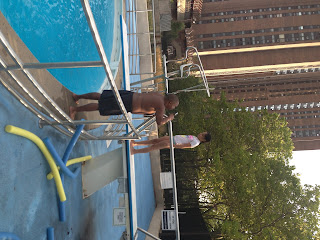 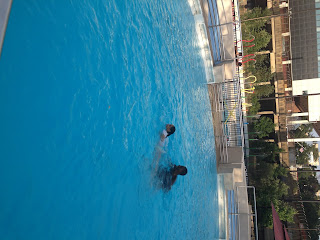 I am thankful to my fellow Warrior Mom Melissa Garcia for the opportunity and Dalilah for being able to sign them up for me.  And  I am also very thankful to the Life Guards who helped make it happen, they made an effort to keep my Donomite engaged!!!

Posted by aboogiedownchicksworld at 1:26 PM