At first look, I bet you saw three happy people.  If you look again, you will notice that my Donomite had been crying.  In fact he just had a meltdown.  And now when you look at the photo, you will see that his little nose is slightly pink and a little swollen from crying.

Rewind to the night before,  I was sitting in front of my apartment, when an older gentleman approached me and my mother in law. He asked if we were Yankee Fans.  To which I answered yes.  The next question was, would you like to go to the game tomorrow?

And here we are.... I said yes, By the way.  My mother in law thought it would be great if we all went.  A family outting to Yankee Stadium.  I agreed! 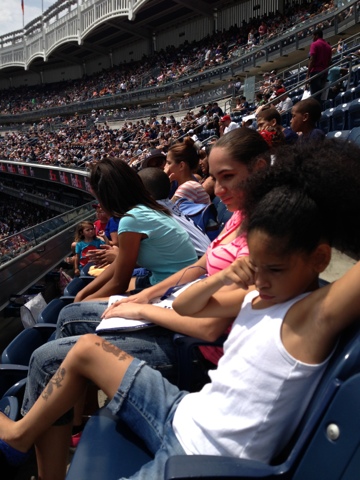 The hubby and I figured the seats would be high, and truthfully, I wasn't sure how my Domomite would handle being high up.  But I made a promise to myself that hit or miss, at least I could say that I tried.

He was fine up until we found our section and sat down.  The minute we settled down, he asked if we could go home now. He asked about a hundred times again.  The hubby had a bright idea.  He took Dono to get drinks and food.  When they got back, I hoped that he calmed down, but he didn't.  I tried to calm, but he wouldn't.

I decided to take him for a walk.  And so we left the stands. 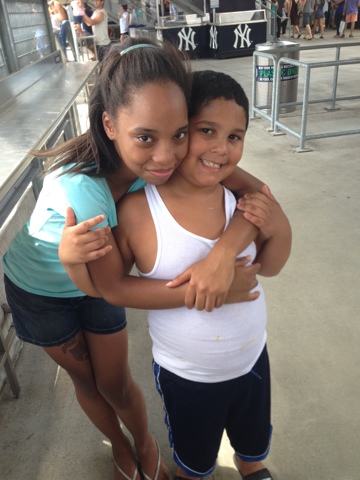 The minute we were away from the stands he was calm and all smiles.  My niece Brittany, came up after us to try and see if she could help.  We stayed here for a long time.  Finally I got him to go back into the stands.  As we sat down, he asked, "can we go down, I don't like to be up.  Can we go home?"
Irene my Aunt by Marriage asked if Dono was okay.  I told her he wanted to go home and she happily volunteered to take him.  She too was having a panic attack from being so high up. 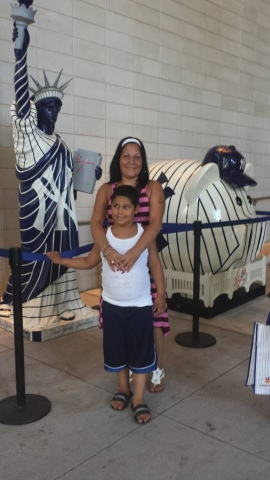 Here they both are looking calm and happy.  Irene went above and beyond.  I am so grateful to her.  After they left the stadium, Irene took him to the park. 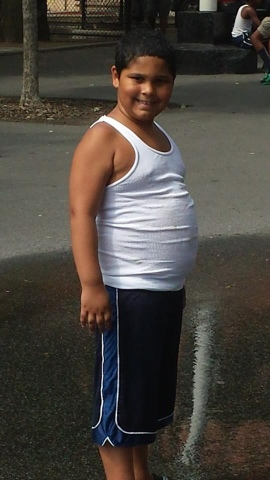 He looks so content and ready to cool off in the sprinklers. 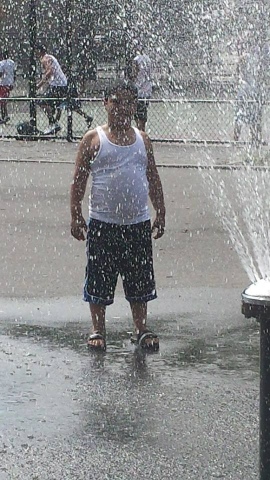 So no, the Yankee Game wasn't a super success, but I tried. Now in retrospect, maybe I could have done a lot of things differently.  Maybe if we had seats lower in the stadium,  he might have lasted longer. But, these moments are all part of the puzzle. Finding the missing piece or pieces.  I learned something, and next time I will be able to handle the situation better.  We came, we saw and we will come again!!!!


Posted by aboogiedownchicksworld at 8:35 PM